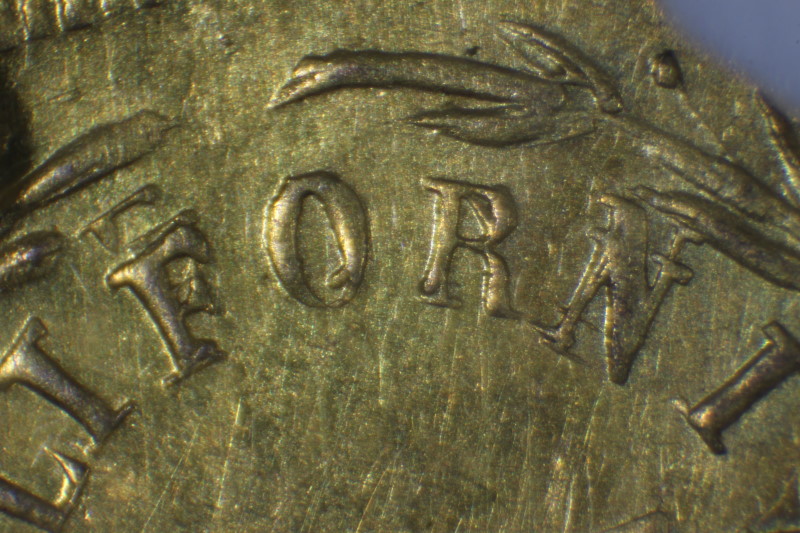 Taking a closer look at this California Fractional Gold varieties

Prior to purchasing these California Fractional Gold varieties, I did not have a lot of time to examine them. The asking price seemed reasonable and I was interested more of the varieties than the gold content. I seen something wrong with the word “California” on the reverse. I did not know enough about the actual design of the coins, so I was interested mainly in finding out if this was an actual re-punched reverse than anything else. I quickly scanned a few websites to see what these gold charms were selling for. They were all competitively priced between $300-$330 USD.

Since these Arms of California gold charms are slabbed, they are a bit of a challenge to take some great photos. These charms are pretty small. being 11mm or so, it makes them smaller than a US small cent, but bigger than a #2 standard pencil eraser. That means the lighting can be completely too bright or way too dark.

I finally had to mount my Canon T3i camera into the eyepiece of the microscope. Using a microscope lens for the Canon 3Ti, I was able to get a few decent photographs of the letters that showed the most drama.

Once I placed the California Fractional Gold varieties under the microscope, all I could do is chuckle. Have a look at what I seen on the 1857 Gold charm. The following letters in CALIFORNIA are at least doubled: C, F, O,R and N.

In the photo below, it ALMOST looks like there may have been two different types of “R” fonts used. One appears to be a straight left leg, while the other one “R” leg has a “t-shaped” leg. There isn’t enough separation on the “O’s” to tell if they are different.

The “F” does not show enough spread to tell if they are different. The N’s on the other hand, appear to be of the same size and shape. But, looking closely at the foot of the “F” – it does look like two of them are different… But you need to see the enlarged photo several pictures below to see the difference. One foot appears bulbous, the other a flat “t-type”.

My initial thought was that these additional re-punches were done one letter at a time. I’d have to take a photo of the reverse and using paint.net attempt to make one layer more transparent than the other and turn it clockwise, trying to line up each punching to see if it was done by hand or machine. It could very well be a “doubled die” but the more logical answer may be it has been re-punched.

The “F” directly below shows three clear “flat tops” of the “F”. One additional middle serif of an “F” can be seen just above the strongest punched middle serif “F”. Take a look at the “F” foot. The two lower ones appear to be different.

If they are different, it means they have been re-punched, more than likely by hand and not by a re-hubbing which would make it a doubled die. If it was a doubled die, all of the font types would be exactly the same.

The “N” directly below shows three bottom left leg serifs. You can clearly see two “N’s”. The “N’s” you see strongly below are #1 and #3.

You can use a strip of paper and tic the bottom left leg of the #1 “N” and then, without moving the paper, tic the first top left serif of the “N”. Slide the paper up to the #2 leg. The upper top left “N” font cannot be seen. Sliding the paper up to #3 shows that the #3 “N” is the highest “N” seen.

So in the end, this gold charm has the type of drama that I like in variety coins.

The website http://www.calgoldcoin.com/ has some additional information on this California Fractional Gold varieties.

Not a fan of California Fractional Gold varieties ? Take a look at our educational series: