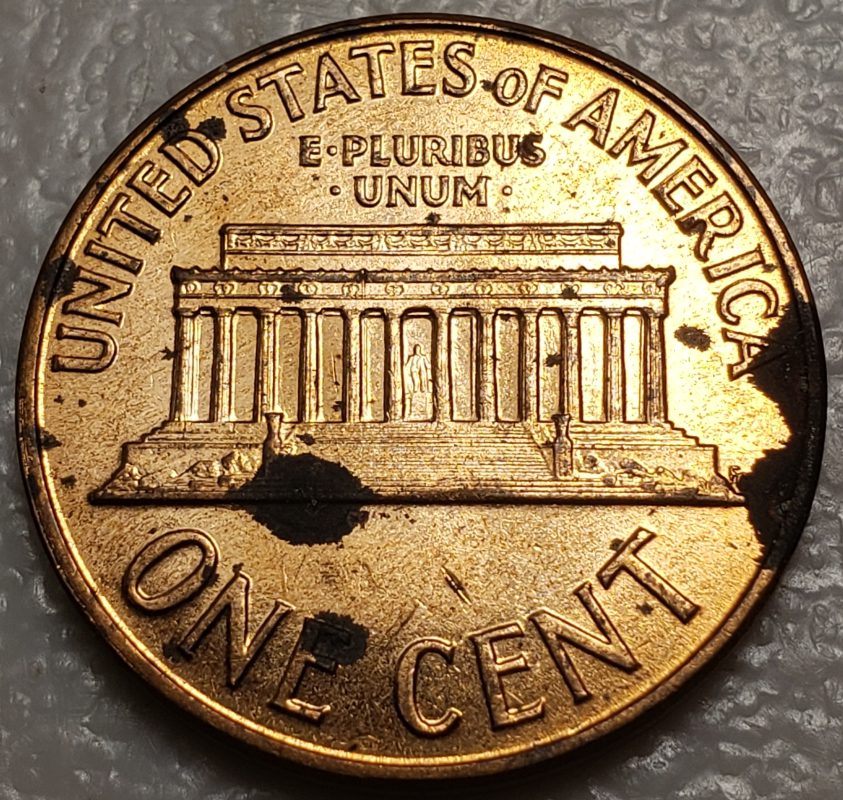 OK, now that you know that cleaning a coin is not the best idea, you should take into consideration what your plans are for this coin. Prior to cleaning a coin, think about the coin and it’s future with you. If you ever plan on selling the coin or if the coin may one day go to a third party grading service to be graded and encapsulated, then personally cleaning a coin may not be the best idea.

When cleaning a coin leave it up to the professionals

A hypothetical situation. Let’s say an older family member or relative gave me two coins many years ago. Let’s say they are both Lincoln Cents and they were in pretty decent shape – at one time. Now I opened the safe and found those coins. I opened the container these keepsakes are in and I am shocked to see this:

Will cleaning a coin get rid of the dreaded Verdigris crud on Lincoln Cents?

So what is this stuff? What is Verdigris and how does why does it affect coins? Will this stuff come off when cleaning a coin?

Verdigris is the common name for a green pigment obtained through the application of acetic acid to copper plates or the natural patina formed when copper, brass or bronze is weathered and exposed to air or seawater over time. It is usually a basic copper carbonate (Cu 2CO3(OH)2), but near the sea is a basic copper chloride (Cu2(OH)3Cl).[3] If acetic acid is present at the time of weathering, verdigris may consist of copper acetate.

So, if you have a coin which has more sentimental value than numismatic value, and you feel cleaning a coin to remove the Verdigris or Cupric Oxide issues is merited, then I leave that decision up to you. Do so at your own risk and costs.

My cleaning a coin experiments

I was digging through a box of flips one day and came across a nice looking 1956-D CONECA RPM 001. But this coin had one of the biggest patches of Verdigris or Cupric Oxide I have ever seen. I pondered the question for a while…. What is worse? Having a coin with this ugly green matter on it, or cleaning a coin that eventually would be labeled Cleaned or spot removed? The area on this 1956-D Lincoln Cent was about the half the size of a green pea in diameter and was located just south of IN on the obverse and close to the rim. The affected area went almost down to LIBERTY. This coin was in really bad shape. I do not believe I could have given it away. So I wanted to see if I could make this Verdigris or Cupric Oxide completely disappear, and I want looking for something that wasn’t chemical based or did it involve simply salt and vinegar. So I started thinking about what items are cleaned about every day ? It would have to be something that after cleaning a coin, the item could be used shortly after. I asked a few folks about this and one of them provided me an answer that I simply said, you know, he is absolutely right.

So I took a chance. I went down to a local drugstore and searched around an area looking for a product that might help. I looked at the labels, but honestly, there wasn’t much help there. I didn’t know if one brand or type would work any better than the other, or if this idea would work at all. I bought a box of this “product” and I brought it home. Hey, I am looking to clean a coin, not earn a maters degree in chemistry. LOL.

I located the said coin, and I found a container that just might be the perfect size. this plastic container is about the size of a 2 inch cube, 2 inches tall wide and deep. I think a golf ball would fit in there comfortably. I decided to use that, and I filled it up about 50% of the way with hot water. I then decided to use 50% of the recommended amount of product that was offered. I tossed the coin in the water and it landed at the bottom of the container heads up, showing that nasty Verdigris or Cupric Oxide area.

I added the secret ingredient and I took the experiment to the coin room and set it on a table. My plan was to leave the coin in the water for a few hours and check on it. I didn’t have anything to lose – this coin was in terrible shape and cleaning a coin like this could only make the situation better. I got busy and before you know it, I was in bed.

Four days later, I seen the container and I thought, oh, WOW, I left that coin in the water. Bummer. It’s probably ash by now. So I took it to the sink drained out the water and added new water to the container. I took the coin out and grabbed an old towel and pat dried the coin and slapped it under the microscope. I was shocked….Wow I had no idea cleaning a coin would show so many details on a coin. Look at that re-punched date – it is clear as day.

Cleaning a coin – the results of the first attempt.

The arrow on the obverse photo shows the primary area where that nasty Verdigris or Cupric Oxide was located. there was a thin film of it as well below LIBERTY towards the rim. I was impressed. I noticed the patina was stripped from the coin, but to me THAT was a small price to pay when this coin looked like it was 50% covered with green slime and its place on this planet was closer to going into a trash can than a flip.

The reverse I was a little concerned about because the product didn’t clean it as well as it did the front. I simply told myself that if I wanted to do this sort of thing in the future, that I would have to locate something that was neutral, and have this tool hold the coin so it would have the coin stand up on its side, much like a bike rack which could hold up a bike tire on a rim. Cleaning a coin takes some thought on how to make it as uniform and good looking as possible.

So, have a closer look at what this Verdigris or Cupric Oxide can do to the surface of a coin, if it is undetected for a period of time. To me, cleaning a coin in this instance was a winning situation.

So, the 1960-D and the 1961-D, those test coins are now in this secret sauce and in the same manner as the coin above. I don’t know if in a few days these coins will look almost brand new or not – one of them, the 1961-D was heavily corroded with Verdigris or Cupric Oxide, and it may take a while for it to be removed.

Again to me, in my opinion, the 1956-D RPM 001 one looks MUCH more appealing. I do not have any plans for this coin, other that taking some photographs of that now nearly perfect looking re-punched mint mark.

I did try an experiment with this “secret sauce” a few days ago. I tossed a bent copper cent that was in a cull container into the secret sauce for about 30 minutes and I took it out. The coin looked horrible, it looked all spotted and uneven when it was under the scope. So I told myself, for the test of this new experiment, where I can show the “before” and “after” photos it’s vital to keep those coins in the “secret sauce” until the 4th day, and then see how they look.

Ok, you all are probably wondering what in the heck did he use, that is a “cleaner” that is safe but powerful enough to clean even the toughest stains – – including Verdigris or Cupric Oxide which can totally ruin a coin’s appearance. Here is your answer:

Summary of how to clean a coin

I used about half a tablet for 1 to 2 coins, in a container that is about 2 inches cubed in size and half filled with water. Let the fizzing action and a lot of time pass before you start messing with the coin. The two experimental coins at the top of this post will be taken out of the secret sauce on the FIFTH day. Side-by side photos will be done to see if the effort was worth cleaning a coin. Standby for an update near the 3rd of April.

OK, the cleaning a coin experiment is done. Below are the two coins, done at the same time, vice one at a time. They were not propped up. The most affected side was face up in the secret sauce. Look at the photos above and then look at these coins and you can determine if the process was beneficial or not.

2 thoughts on “Cleaning a coin? When should you do this?”