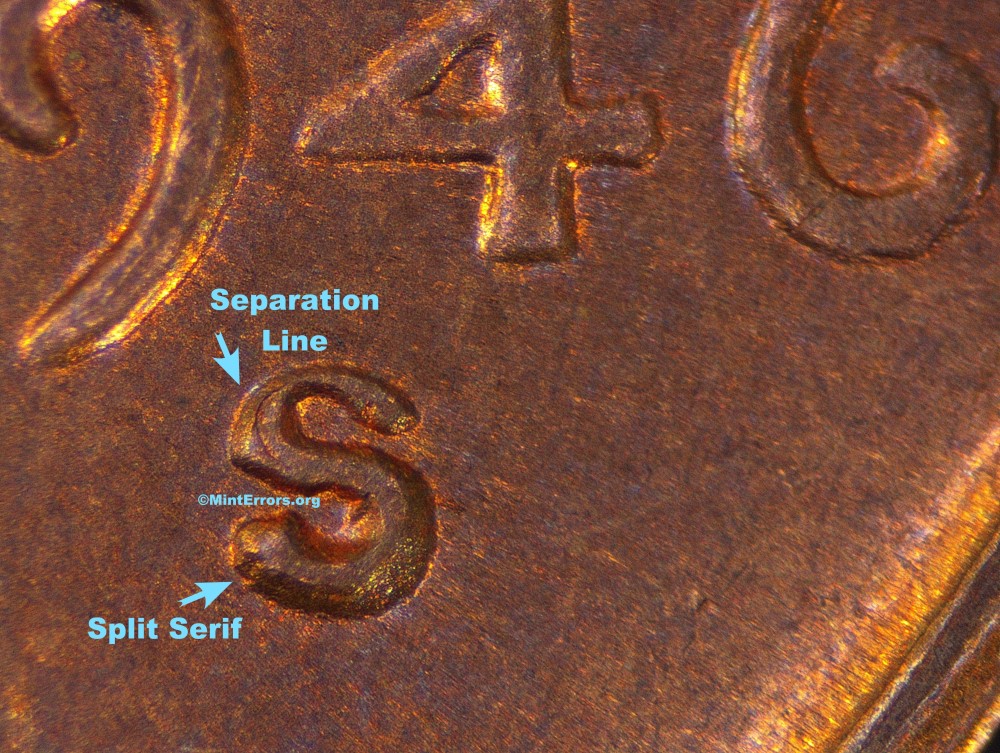 Among the Lincoln Cent collection are a wide variety of, varieties as well. The problem with taking photographs of varieties, lighting and the perfect shot to show people what the variety looks like can take some time. For example, I just spent about 45 minutes attempting to take a good photograph of a 1946-S Lincoln Cent RPM. I had two examples to take photos of, and here they are:

Ok, the first example may be a bit better than the second, but choices are subjective. So the time allotted to take the photos has been documented but, the final attribution of the coin is not yet completed. If you look at this 1946-S Lincoln Cent you should be able to discern that there is something different about the “S” mintmark.

The upper photo shows a strong lower spilt serif. This typically occurs when the mint worker adds a second mintmark on a working die. This is placed on top of a partially struck mintmark.

In this case it looks like the original and partial “S” mintmark was struck to the west. Then the mint worker added a second, stronger and apparent mint mark, placing it slightly to the east.

The creation of re-punched mint marks ceased when the US mint decided to add the mint mark to the master hub so mistakes or varieties like this would not happen any longer. The US Mint started adding the mint marks to master hub dies in the mid 1990’s. That means effectively that mint marks have not been produced for over 25+ years.

The majority of the copper Lincoln Cents and re-punched mint marks are between 1940 to 1982. It will be my personal goal to attempt to start listing the Lincoln Cent errors and varieties on this website. The “normal” Lincoln Cents will be listed on our other website https://TheCoinStore.org .

This quest is a work in progress. Should we have a major update to this story, we will add a post on this https://MintErrors.org website. Keep an eye on our STORE area on this website as well as https://TheCoinStore.org