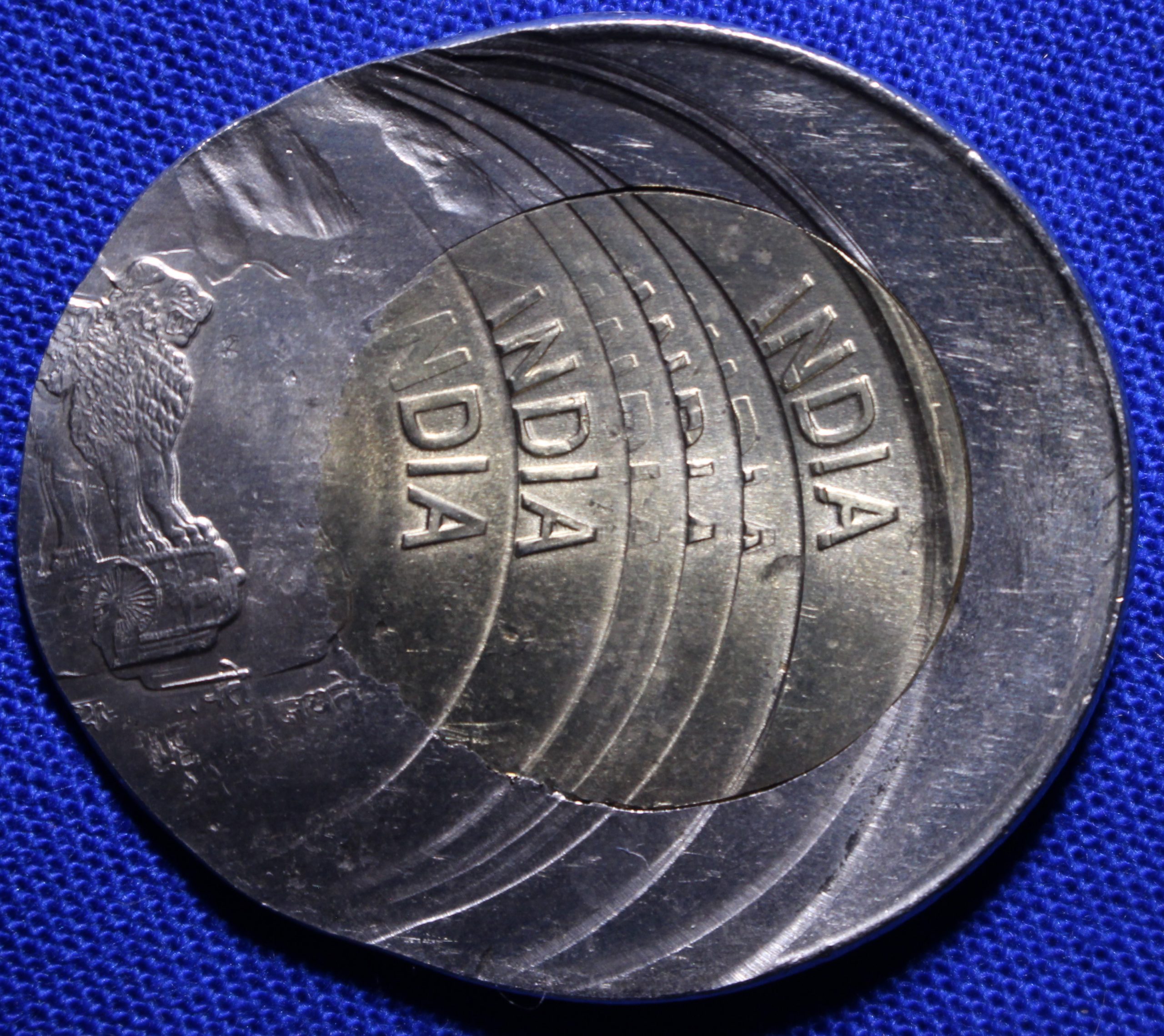 Major mint error coins are here. Now to attribute them !

I have a source in India that has delivered the first part of a large order of major error coins.

I opened the package and I was pleasantly surprised at the quality and size of these major error coins. Before I ordered these, I took a quick look at the https://numista.org website to see what the overall normal size the coin would be, and thought it was big enough, so I made purchases based on what I knew. I wanted nice clean, well struck major error coins that were appealing.

On major error coins, that combination of appealing and multi-struck is not always there. When it comes to buying merchandise, I am EXTREMELY picky. I need to be because the customers and clients I have love the “drama effect”. So, in order to please the end customer, I have to painstakingly approach each purchase and ensure the quality and eye appeal is there.

This major error coin appears to have been correctly struck. Upon being struck, it became attached to the reverse die. The coin shows the characteristics of a nice early to mid-stage die cap. It has high side walls which are pretty uniform all the way around the coin. At this point, I cannot determine the amount of potential strikes this capped die did, but it appears to be a moderate amount, hence the high side walls and the deterioration of the initial obverse strike.

In normal operations, there are two dies, one for each side of the coin. The objective is to feed the proper sized, unstruck planchet onto the anvil die. The planchet should be flat and centered on the anvil die, and it awaits the movement of the hammer die.

The hammer die is the one that exerts the pressure in order to make the dies come together with a planchet in the middle. The hammer die squeezes this all together. Then, the hammer die raises up and the planchet, now imprinted with the obverse and reverse die images is ejected out of the die path. Another blank planchet is fed into the striking chamber and the cycle continues.

An die cap occurs when things don’t go as planned.

There are many ways a die can become capped. Some times this can be explained, sometimes not. You will have to use your logic and imagination to figure out why a particular coin became a die cap. It could be a slightly softer planchet, it could be the dies were given a lttle too much grease in maintenance. It could be the die itself struck the coin too hard and adhered to the die. The possibilities are many.

When a die becomes capped, or covered by a coin, the minting press operates the same. It’s job is to hammer an image onto a planchet. So, when a die is capped, the machine continues. The die that is capped simply does not allow any new planchets to be struck on one side. So, in other words, a minting press with a capped die will produce “one sided” coins, while the other side (the capped die side) will be blank.

If the coin that causes the die cap is pretty solid, there are only two ways it will come off. It will do so many strikes to other potential planchets that the metal becomes thin and brittle. At that point, it will probably fall off, may get struck off center a few times and ejected. The other way die caps are cleared is by human intervention. Some one detects the die cap, they shut down the press, remove the capped die and the process turns normal once again.

The coin below is a major error coin as well. When I pulled this coin from the mylar, it gave me the impression that the center portion of the coin may try to separate if it is not handled properly. When I adjusted the lighting to take the photos below, the coin was positioned just right and I could easily see seven strikes on this 20 Rupee coin.

For multi-struck coins, like I said at the beginning, it boils down to what you want more of, appeal or strikes? To me, this coin had a balance of both and it is a decent sized coin as well.

Multiple struck coins for one reason or another get trapped within the striking chamber of a coin minting press. Minting presses generally operate at a higher speed, since they have to produce a lot of coins to support the currency for that year. I call them mad jack hammers.

The minting presses are fast and will continue to operate even if there is a train wreck of planchets trapped around the striking chamber. Planchets will get struck as many times until they find their way out of the striking chamber. Sometimes a mint official will spot check a press and see an issue, stop the press and clear the debris and multi-struck coins out and the normal process of minting coins can continue.

These major error coins will be on display at coin shows we attend. Some will be for educational use only. A few may be available for purchase. Please feel free to ask us to see one of these errors.