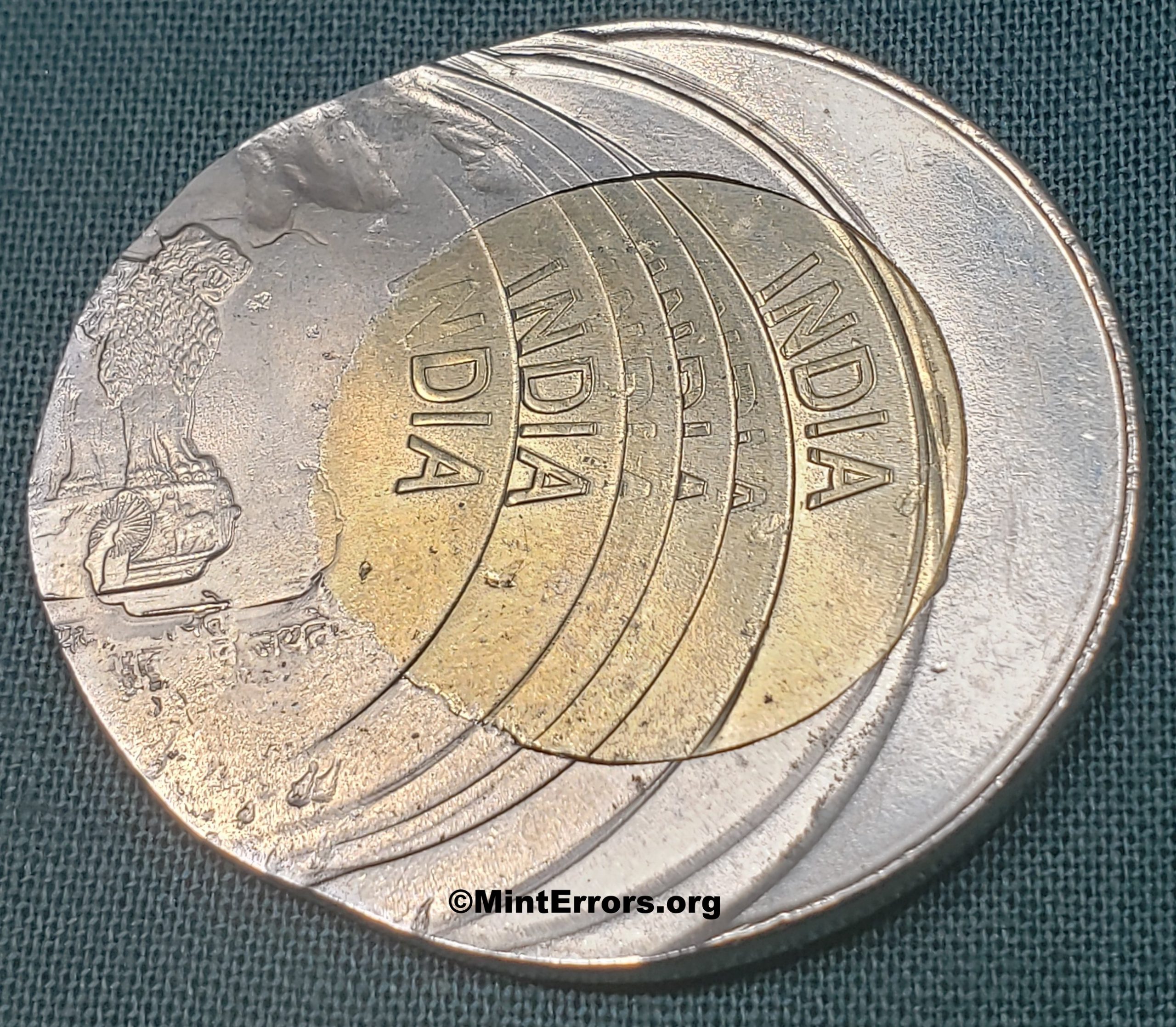 I wanted to purchase more than a dozen of the multi-struck errors, so I could have a wide variety as well as have a spread of the type of multi-struck coins that are out there. I did manage to find a few combination errors as well.

In most cases when a major error coins is being produced, something has gone wrong in or just before the mint press striking chamber. Instead of a nice, neat, orderly line of planchets all behaving and patiently awaiting their turn in the striking chamber of the mint press, something goes wrong over a small period of time. Some of the planchets become upset in the the delivery line to the machine.

The planchet line can be askew, have planchets piled on top of one another or it could simply look like a major train wreck with planchets scattered everywhere. The minting press is used to be fed planchets on a fairly regular and timely basis. The spacing and timing of each planchet in the striking chamber needs to be perfect in order for everything to be done correctly.

As the unkempt line of planchets arrive at the striking chamber, and they not orderly, are out of sequence and stacked, the mint press will continue to do its job – striking blank planchets into coins. You can probably envision some of the combination of planchets which may approach the striking chamber when they are not in line. Once these are struck, they may have a better opportunity to be struck more than once since they have escaped the mint’s semi-fool proof technology.

They escaped being told to get back in line in an orderly fashion. So this non-uniformity can complicate several areas within the striking chamber, to include allowing the coins to centered between the dies, struck just one time and successfully leave the minting press. If there is a “traffic jam” in the area of the striking chamber, things can go amiss very quickly.

Some of the minting machines appear to be striking coins at a rate of about 2 per second, others perform the striking process at a very high rate of speed. That means it would not take long for a planchet within the striking chamber to take close to a dozen strikes and finally escape the minting press.

The multi-struck coin is some how prevented from exiting the striking chamber. The coin is simply subjected at several to dozens of strikes from the minting press. Let’s take a look at some of these multi-struck major error coins from India.

This 2020 India 20 Rupees multi-struck major mint error coin below, exhibits an initial off center strike, followed by at least eight additional strikes from the minting press before the coin exited the minting press.

The coin pictured just below is the first major mint error coin I bought from India. I decided I wanted to make an impression on the dealer, and I bought the coin at full price. I wanted to turn their heads and let them know I am here for the business side of the coins. The reason I did this was I could see at quite a few strikes on this coin, and I wanted to get this multi-struck coin in the coin lab and see how many strikes I could clearly see.

This multi-struck error was initially struck off center. In a close up view, it appears this coin may have attempted to become a capped die but it failed. There are numerous strikes in the valley that is located near the center of this coin. The reason the capped die failed was due to not enough metal to adhere around the base of the die.

Flipping the multi-struck coin over, it is unifaced, meaning that this error coin did not have direct exposure to the reverse die. Something prevented this planchet from becoming “sandwiched” in between the two dies so it could receive an obverse and reverse image. It is difficult to know why. The striking chamber area may have been littered with other struck coins and blank planchets, or the reverse die may have been a capped die.

For this Multi-struck coin, there is an area on the obverse, near the edge of the coin that is just littered with multi-strikes. I thought I could count most of them with my naked eye, but I decided to place the coin under the microscope and see if I could get a semi- accurate count of these multiple strikes. Below is a photo of that area.

How many strikes do you see in the photograph below?

This multi-struck 10 Rupees coin was initially struck off center and then was gradually “walked” from left to right while receiving what appears to be more than sixteen total strikes. The coin appears appears to be that of a “toilet seat”. The multi-strikes elongated the coin left to right.

Additionally, I wanted to add a few notes on this multi-struck major mint error coin and note some of the mechanical things that happen to these major errors. In my opinion, my desire for these error coins starts to fade when the coin starts to resemble a heap of junk metal that does not look like a coin anymore. Sure that coin may appear dramatic and desirable to other error coin collectors out there, but there is a limit for me.

This multi-struck major mint error coin is at the minimum level of appeal and drama. Take a look at the initial original thickness of the left side of the coin. Now compare that to the area where the planchet received at least a dozen or more strikes from the minting press. To me, that is a big difference. This coin is my personal dividing line.

This five Rupees below was struck normally and then some how remained within the striking chamber. The obverse side of the coin shows a total of at least three strikes. Additionally, there is a lot of “chatter” from the K3 to K6 (clock) position. This is usually observed if there is are other coins or planchets on top of one another and are moving, but there may be some pressure exerted against this mass.

The strikes occur near the same position, centered near K10. This could represent the coin may have been pinned in the same area and received multiple strikes. Add in that the epicenter of the strike would occur near the rim of the coin, potentially adding to the mechanical damage. There is some evidence on this on the word “INDIA” to the west, and any other identifiable features have been blended out.

The multi-struck error coin pictured below was struck off center. Then an additional amount of strikes occurred near the center of the coin and slightly southwest or towards K8. Somehow, the striking direction shifted, and the coin received additional strikes heading toward the northwest or K11 position.

For the coin pictured below was removed from its original holder, I thought something was “wrong”. The reverse of this coin is obviously brighter and has a more reflective surface. It looks almost proof like. I am researching this coin further to determine if it could be a wrong planchet as well as a multi-struck error coin.

The coin was originally struck off-center. The coin received additional strikes traveling in a southwest or K7 direction. The multi-strikes are evident as slash marks on the obverse near the K12 position. It appears that there are at least of seven strikes on the obverse of this coin. There are multiple impressions of the word “INDIA” toward the bottom center of this coin.

The reverse of this coin is more reflective than the obverse. Multiple strikes are evident as dashed lines from the K12 to about K2 position. The 2020 date appears at least five times near the middle area of the coin. The reverse shows at least seven strikes.

The coin pictured below appears to have been struck properly, but there is a fine, cut line almost all the way around the rim, minus the area where the additional strikes are located. The additional strikes centered eastward near K3 had the epicenter of the strike very close to the rim of the coin.

The coin pictured below shows limited information on the obverse of this 10 Rupee coin. A sole word “INDIA” predominantly stands out along with a few other lighter wording. The coin is slightly elongated. The initial strike was off center. The obverse is quite “boring” compared to the reverse.

The reverse on the other hand, shows a large number of strikes which travel in the southeast or K4 direction. There may have been additional strikes in another direction, since the K7 area has hints of strikes there. An additional strike or a partial indent is located near K10 to K12. The last apparent strike to the K7 location looks as if it had three strikes as the “1” and the “0” in 10 exhibit three “1’s” and two “0’s”.

The obverse of the coin below is almost uniface in nature, the exception of a sole strike to the far east at K3.

The reverse has several strikes, even several are right on top of one another. Looking at the reverse and the “10”, there are two tens almost directly on top of each other and a third 10 slightly southwest or near K4. Two additional strikes are evident west one at K8 and the other remnant strike near K10.

At first glance, the coin pictured below appears to be a double struck coin. The obverse shows a typical double struck design. A closer look at the bottom second strike gives a slight hint. It almost looks bottle cap-ish, but there is simply not enough material to form a capped die. This may signify there are multiple strikes on the reverse within a small tight area.

The error coin pictured below has an unusual pattern on the obverse. I am attempting to identify the source of the issue.

This could have been a struck through or a pattern that was due to the coin oscillating back and forth when the coin was in the minting press. The extra metal between K7 and K11 look has the appearance of a capped die, but it looks like there is not enough material there to create a full capped die.

The reverse shows a nice secondary strike. The only hint that the reverse shows is that the center portion of the coin does appear to be weakly struck, which may have some thing to do with the abnormal pattern on the obverse. Note, that the photograph makes the second strike look as if it is risen above the first strike. It is not, the second strike is pressed into the original strike.

The obverse of the coin pictured below appears to have an indent. In fact, just to the top and bottom of that indent, there is a tell tale sign that another planchet or coin may have been on top of this coin as well. The radius looks to be correct for an additional coin.

When flipping this error coin over, the evidence is there to support the theory – in a different way. The second strike on the reverse shows two rims which indicates that the coin was struck at least three times. The strikes were very close together and at the top near the K11 position there may even be a potential for three rims in that area.

Those are the top twelve Multi-struck major error coins that I currently have in stock. I do have others, but this post is pretty long already. I hope these photos and analysis of the error coins were informative. Feel free to ask a question, provide feedback or suggestions.

To see some of our other major mint errors, please see these posts: