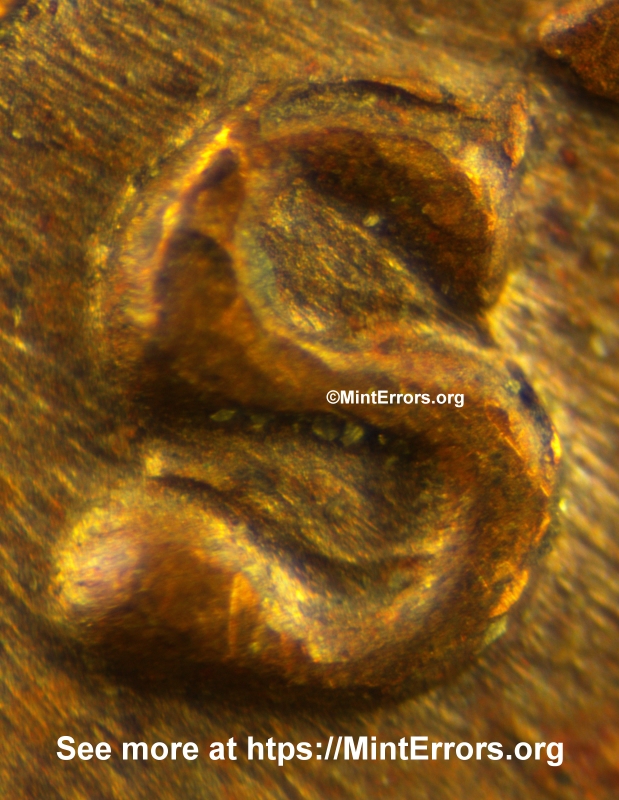 Wow, pretty impressive. Double lower serifs vice just a notched or split serif. The top left middle bend hints at more than two “S’s” but two it probably is. A nice strong, bold RPM that is one of my favorite.

This RPM resembles the 1960-D CONECA RPM, only 22 years younger. This CONECA RPM exhibits a nice double vertical bar. If one looks closely into the center of the “D” you can see a vertical line in there as well. If you use a piece of paper and tick the weaker vertical bar, and then tick the light horizontal bar in near the center of the hole in the “D”. Slide that paper with those markings line up with the inner part of the strong vertical bar. Does it line up with the outer curve of the stronger mintmark ? The answer should be yes !

This RPM took me just a little longer to get a good photo of what I was seeing in the microscope, vice what the digital camera wanted to offer on the screen. The area to the north shows a “mushy” style separation line from the top serif toward the middle curve of the “D”. Additionally there is some issues in the center of the “D”. The southern area of the “D” shows a lower area of another weaker part of the “D” from the lower serif, heading east, almost making it to the curve of the “D”.

This RPM isn’t as dramatic as many of the others shown on this page, but it bears showing off. This RPM displays a nice split in the upper left curve of the “S” , along with a lower split serif . The middle part of the “S”, the underside suggests there are two different “S’s” seen there, though neither one line up with the upper part of the “S” that protrudes westwardly.

When I seen this RPM under the microscope, I quickly chuckled and called it “ugly but beautiful”. You can stare at this one for quite some time. I adjusted the lighting and tried to pull out each individual “divot” showing multiple re-punchings were quite evident on this example. In the end, we have two extremely easy to see upper and lower split serifs. The lower split serif hints at additional punching, but the evidence is weak.

For this RPM, I had a heavy task at hand. I wanted to show that sliver of a upper split serif, and be able to focus in on that and the split lower serif. GEESH. after some messing around, I finally turned the RPM upside down and Viola ! With the high magnification, it is just plain difficult to get a wide area in focus. But believe me, this is as focused as this one can get. The bottom line is, you can see it is a nice RPM.

This RPM is just plain different. The mint worker that added these “S” mintmarks to the working die was just a tad off from placing the stronger “S” over the top of the weaker “S” . This RPM shows that dramatic effect from the upper split serif all the way to the lower curve of the “S”.

When I got to see this RPM under the microscope, all I could do is chuckle and say wow. There is a bold portion of the weaker “S” to the north of the primary “S”. From there it gets difficult to see, but in the upper middle hole of the “S” you can see a very light hint at the curve. Examination of the lower hole area of the “S” shows a thin singular line that is probably the weaker “S”.

Geesh, matching this one up on the paper trick is difficult, since I do not have a good logical approach on whether the weaker “S” is showing the upper or lower portion of the mintmark. There is however enough drama and evidence that says this is an RPM !

Another RPM that is dramatic, but in a simply kind of way. The pick up point area is simply towards the southern region of these “D’s” and it displays two lower serifs. It was difficult to obtain a nice photo of this coin since it was so dark.

This RPM was another that exhibited a darker red patina and the lighting refused to display this example in a dramatic sort of way. Just above the upper serif, to just above the upper middle part of the “D”, there is a hint at another “D”. The lower serif is a bit complicated. The lower serif shows a strong main serif. Directly south of that an apparent split serif is evident. This one is a head scratcher for sure. If I can get better lighting on this, example, I will replace the photo.

This is one of the reason I like BU Lincoln Cent RPM’s. They just pop and show the dramatic side of the photography. Although there is limited proof that his is an RPM, ii is there. Bold and beautiful double vertical bars, slightly set on an angle. Also within the center of the “D”, to the far right, is another paper trick to experiment with. You won’t be disappointed. Under the scope, to the south just under the center of the hole on the outer edge of the mintmark is a foot like separation line.

This RPM was taken with minimal effort. It is just crazy dramatics goin on here. An obvious slanted vertical bar appears within the center of the “D”. Combine that with the southern area displaying a second “D” protruding from the primary mintmark and this is drama city. The lighting was spot on showing an almost golden glow to this dramatic Lincoln Cent RPM.

Another BU Lincoln cent RPM with a lot of drama and easy to get a great photograph. The middle of the “D” displays a thin ribbon of a vertical bar. to the south east of the primary mintmark, a portion of the curve from the weaker “D” is evident.